Aims to secure habitats for the long-term survival of cheetahs and their ecosystems through multi-disciplined and integrated scientific research, community outreach and education programs

Cheetahs don’t avoid water – they swim across rivers
Cheetahs hunt at night to avoid hot weather and disturbance
Cheetahs hunt alone or in group; they use both: a full-speed-chase or a slow-speed hunt
Males live alone or in coalitions consisting of brothers-littermates and sometimes unrelated males
Females live solitary or in coalitions and can raise cubs together
Cubs have been seen accompanied by an adult female and a male

In the 1970s there were about 15,000 cheetahs in Africa, while now the global wild cheetah population is estimated to be as low as 7,100 and confined to 9% of its historical distributional range. The last significant populations remain in Southern (Namibia, Botswana, SA) and East Africa. The South African and East African populations are represented by different subspecies: Acinonyx jubatus jubatus and Acinonyx jubatus raineyi respectively.

In the past cheetahs were widely distributed across Kenya. However, over the years, due to human population increase, there has been a loss of habitat, a reduction in prey species and numbers. Conflicts with people, diseases, poaching and poorly managed tourism, have greatly reduced cheetah numbers. In Kenya, cheetahs are now resident in only about 23% of their historical range.

Cheetahs are considered “Vulnerable” by the IUCN and are listed in CITES Appendix I. Preserving remaining populations is critically important and a significant task right now.

LET’S SAVE CHEETAHS for POSTERITY TOGETHER!

The mission of the Mara-Meru Cheetah Project is to promote the conservation of cheetahs through scientific research, community involvement and education

Background of the Project: In 2000, Elena Chelysheva was invited by the Kenya Wildlife Service (KWS) to work as Assistant Researcher at the Maasai-Mara Cheetah Conservation Project. At that time, she started collecting photographic materials, and now the Project team is able to trace kinship between generations and to build the Mara Cheetah Pedigree. This work has never been done before and the team is happy to share results with the Mara stakeholders. The ongoing research is a follow-up study, which will compare new results with the previous one in terms of cheetah population status and effect of human activity on cheetah behavior

The Mara Ecosystem (Mara) covers about 3500 km2  including Maasai-Mara National Reserve and surrounding conservancies. The Mara Ecosystem has high tourist activity and relatively low grazing, while Meru has the low tourist visitation and very high grazing. The Maasai-Mara National Reserve (1510 km2) is one of the most popular tourist destinations, while the Meru Conservation Area (4000 km2) is considered to be one of the remaining true wilderness areas in Kenya. Several studies have been conducted on the cheetah population status in the Mara, which  can be used for  a comparison with the current study. In contrast, there has never been cheetah study the Meru region. 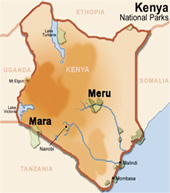 The Meru Conservation Area (Meru) is known for its two national parks – Meru and Kora, where Joy and Jorge Adamson were working on cheetah and lion re-wilding in 1960-80s. Little has been recorded about Meru cheetahs since. This conservation area is one of the largest in the country (4000 km²), and significant parts of it is covered by thick bush. Cheetahs here have to share territory with herders who graze their livestock within the parks and who see carnivores as the major threat to their livelihood – domestic stock. It is unknown how many cheetahs reside in the area and how well they adapt to environmental change.

Mara and Meru – are two regions of Kenya, where cheetahs experience different challenges and where their population status and behavioral adaptations remain a mystery. Masai-Mara National Reserve is world famous for its spectacular annual event – the Great Wildebeest Migration. The reserve is situated in the Rift Valley with Tanzania’s Serengeti Plains running along its southern border. Living on protected land, cheetahs here have to coexist with their natural enemies – hyenas and lions, while at the same time having to find their niche in an area crossed by dozens of cars in search of these magnificent animals.

While the global cheetah population is going down, we expect these study areas will provide more details on cheetah survival strategy in different ecological conditions and will help in answering the following questions:

How do cheetahs find ways to survive and what behavioral mechanism do they use for adaptation to different environmental conditions? What is the best type of land and wildlife management to support sustainable cheetah population in the country?

The MARA-MERU Cheetah Project works in affiliation with The Cheetah Conservation Fund (CCF, Namibia) and Kenya Wildlife Service (KWS),  in partnership with Narok and Transmara County Councils and different Conservancies surrounding Maasai-Mara National Reserve, and in collaboration with other projects operating in the Mara and Meru regions for the best interest of cheetah conservation in accordance with the National strategic Plan for Cheetahs and Wild Dogs. The Project also gets great support from over 30 Mara lodges and camps, wherein guides have become field reporters for the Project.

This long-term research, started with a reconnaissance in November 2011, followed by actual field work in October 2012. For several months the team was based at Keekorok staff quarters in the heart of Maasai-Mara National Reserve and from June 2013 the project has had its permanent residence at the research base in Talek.

Working as Assistant Researcher in the Maasai Mara Cheetah Conservation Project in 2001-2002, Dr. Elena Chelysheva developed an original method of cheetah identification (based on comparison of spot patterns on the front and hind limbs and spots and rings on the tail). Over the years, a vast photographic database of Mara cheetahs has formed the basis for building the Mara Cheetah Pedigree. This helps us to assess population trends over the years, reveal parental relationship between individuals, determine cheetah’s lifespan, and learn each cheetah’s personal  reproductive history and the survival rate of cubs.  This work had never been done before and the team is sharing Project results with the Mara stakeholders and relevant Kenyan governmental organizations.

The team is working with many photographers, rangers, tour-guides, visitors and researchers who share with us their photographs taken in different years. As feedback, the team provides respondents with available information about these cheetahs (date of birth, kinship, personal history).

The project performs the following activities:

Data collected over the years, in different seasons, various areas and on different individuals,  reveals mechanisms of behavioral adaptations of this valuable species. We also provide stakeholders with scientifically-based information regarding the impact of tourism on cheetah behavior, welfare and survival.

By moving within the region, adult cheetahs, and cubs following their mothers, learn different types of habitats and experiences, including encounters with prey, food competitors, humans and predators. In that way, they develop different behavioral strategies contributing to their survival, which we record while monitoring these animals. This makes the involvement of various Camps and Lodges from different parts of Mara region very important as they provide significant contribution to our project through ongoing information on cheetah sightings and invaluable photographic materials.

Intensive behavioral observations are the scientific basis for modeling cheetah survival strategies in different ecological environments. The collected and analyzed data will help to improve cheetah conservation activities, since it will aid in the formulation of conservation strategies for this particular species in these regions.

Interviewing local communities provided us an understanding their of knowledge levels, the challenges they face and the different perception about Mara wildlife of the different generations of Maasai people. Based on this information, additional ecological educational programs will be developed. The findings of the project form the basis of community education which promotes improvement in local communities’ knowledge, perception and involvement in the conservation of wildlife in general and cheetah in particular.

The Mara-Meru Cheetah Project is funded with donations from various sponsors. You have the unique opportunity to follow the lives of these wonderful cats, and even play a role in their future. You can  support any Mara or Meru cheetah you choose. Learn how to become a Team Cheetah Supporter.

To learn more about our work please visit our Facebook page at:
https://www.facebook.com/MaraMeruCheetahProject

You can help us by sending some of your photos of walking/standing/sitting cheetahs (profiles of both sides are preferable) to mara-cheetah@mail.ru (for the Mara cheetahs) and meru-cheetah@mail.ru  (for Meru/Kora/Bisanadi parks cheetahs), together with your name and e-mail address. We can tell what is known about the cheetah in your photo/s. Your photographs will be used for identification purpose only and will not be passed on to a third party

The research will benefit from any photos of cheetahs taken in the Mara in 1999-to date or Meru and Kora National Parks and Bisanadi National Reserve.

THANK YOU FOR YOUR SUPPORT!