While wandering through the ecosystem, male cheetahs encounter single males and coalitions, and display more or less peaceful or aggressive behavior. In the wild, there are known cases of coalition-mates killing and feeding on the carcass of the intruder, as, for example, in Phinda Resource Reserve in South Africa. For 9 years of observation in the Mara, we have witnessed numerous cases of collisions of different males (in groups or loners), which lasted from several hours to two days, and fortunately, not a single male was injured. In September 2020, we observed the interaction of a cheetah coalition of two males with a male from the three-member coalition known as the Chai Boys. Both coalitions of young males emerged in the past year: two (Mkali and Mwanga) appeared initially in the Triangle in June, and three Chai Boys in the reserve in October. In December 2019, both coalitions were spotted in the reserve, and in early 2020, the Chai Boys moved to the conservancies (Naboisho, OMC and Ol Kinyei), while Mkali and Mwanga preferred the territory of the reserve, although they also used territories of the neigboring Naboisho and OMC. At the end of September 2020, one of the Chai Boys appeared without his coalition-mates in the reserve, where he encountered a pair of males. It is obvious that the scenario of a meeting of two complete coalitions – a pair and a triplet – would be different. However, in this case, the couple trapped the lonely male, and for many hours until darkness was not giving him the opportunity to get out of the ravine. It remains unclear what had happened to the other two Chai Boys, but it was clear from the behavior of all three males that the couple was not ready to accept a new member, and the one was not ready to join the pair.
Loners find it more difficult to compete for resources with coalitions, especially those as large as Tano Bora, so they either have to travel far to avoid colliding with coalitions, or forge their alliances with unrelated males to survive and succeed. 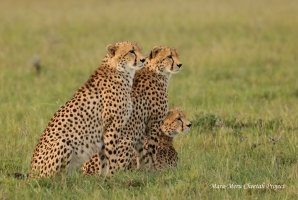 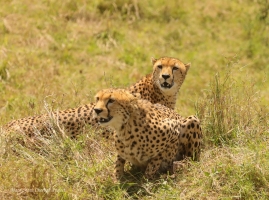 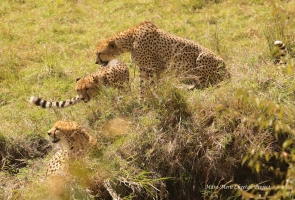 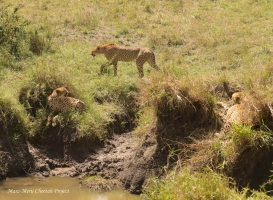 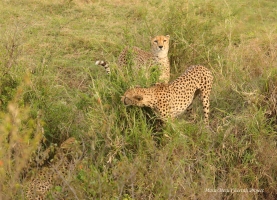 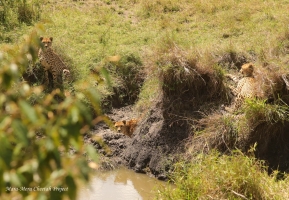 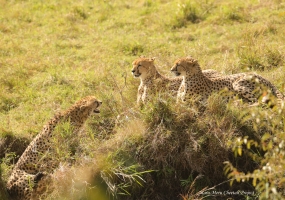 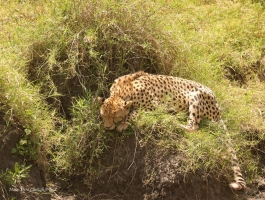