HONEY (MISHA) and her SONS

When we first met this female  in October 2001, she was a fully grown female approximately two years old. We gave her name Misha. Several years later Federico Veronesi, photographer and tour guide, named her Honey. 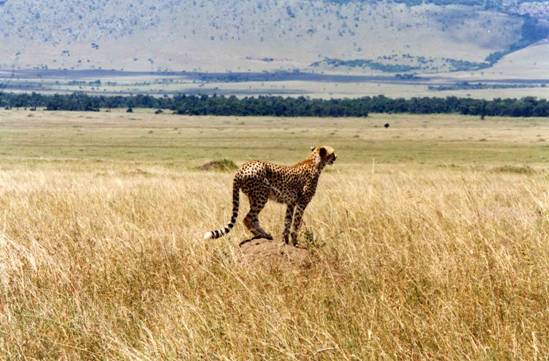 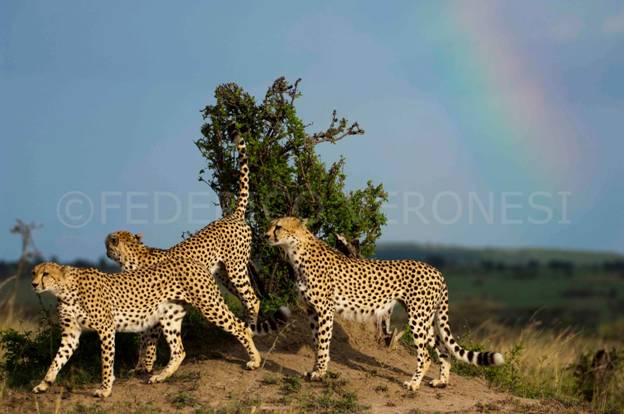 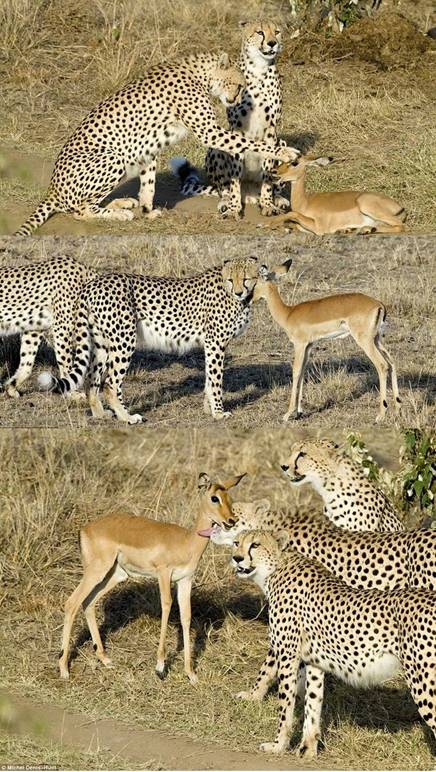 All three brothers were always together until the fall of 2011 when one of them was killed by a lion.

One of the brothers (M3) after successful hunt in  November 2011

In the evening on January 21, 2013 as we were driving back to the Research Station, we came across two Honey Boys (M1 and M3) lying under a tree that is approximately 30m from the road. Then hyena appeared from the east. It was approaching straight to cheetahs  unhesitatingly, but stopped in 15 meters and started self grooming.

Cheetahs looked relaxed, but started grooming themselves intensively which indicated their discomfort. In 3 minutes hyena decided to approach closer to the males, and then started circling around getting closer and closer to cheetahs. In 2 meters from the males, hyena sat down staring at them for several minutes and then stood up and walked away to the west. When it was in 15 meters, one cheetah stood up, came to a tree, sniffed it and marked the trunk, then walked away to the east and defecated in 5 meters from a tree. At that time his brother stood up, walked to the tree, sniffed and marked it as his brother, defecated in 8 meters and walked away, following his brother.  When the sun begun disappearing down the horizon in the west, the hyena lay down on the road, while cheetahs were slowly walking away to the east.

In April 2013, M1 died of fatal wounds after lioness attack. For a week after death of his brother, M3 was  sometimes calling him. He is roaming in the same area now, and  keep returning to the place he saw his brither. M3 was always more alert and very successful hunter. In March 2013 we found him alone hunting Tompson gazelle.

After he finished eating, he sarted calling his brother, who was 4 km away. M3 was staying with a kill for 2 days and by 11.00 of the second day, he finished the gazelle. 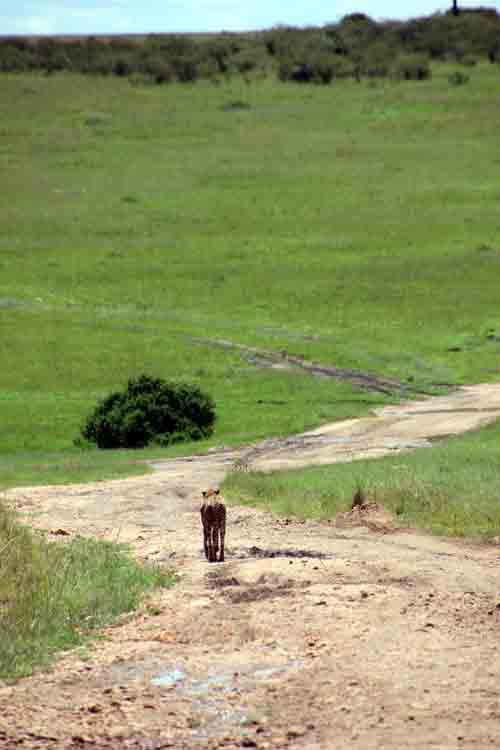 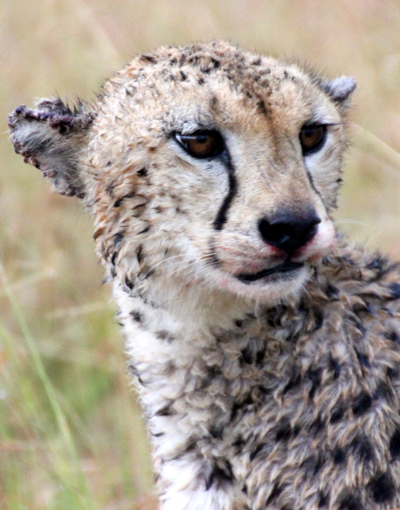 RESY
We first met this female  in November of 2001 near the Mara Research Station, and gave her name Resy. She was fully grown female, estimated to be about 2 years old. 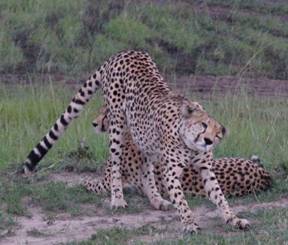 In July 2011, while looking through cheetah pictures taken in 2008 by professional wildlife photographer Federico Veronesi (www.federicoveronesi.com), I found Resy with three small cubs.  Of the three, she successfully raised one male. She was 9 years old at the time the pictures were taken. 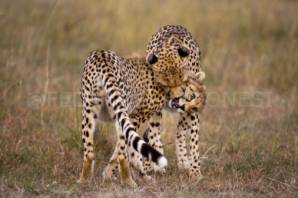 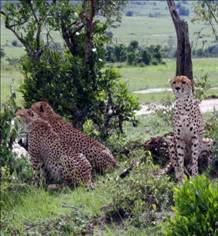 We saw Resy again in November 2011 with two sub-adult female cubs. She was 12 years old by that time. It is very important to monitor cheetahs until their death to help estimate the lifespan of Mara cheetahs.

At 10:00 of the 28th of March, 2013 we found F26 in Sopa area. She had a wound on her left hip area. At 13:30 a male impala passes by 5m from her but she does not chase the impala instead kept an eye on it as it passed by until it joined a group of 2 female impalas. This is when Rosastood up and stalked this group and suddenly burst into a full speed chase on a female impala and puts her down within two minutes.

She then dragged the kill under a shade and sat looking around for almost 45  minutes before eating. During this time, a hyena shows up 80m away, sniffs the air and leaves for where it came from. F26 embarked on eating but with alternating moments of looking around. At 17:08 Rosa leaves the kill and moves  uphill. Hardly had she left the sight, Vultures had their landing gears down onto the kill with their noises attracting the black backed jackal who chases the vultures and takes over the kill. Minutes later, a hyena, suspectadly the one same one shows up scares the vultures and jackal away from the kill and picks up the whole carcass and runs away with it!

The most famous Mara cheetah female that successfully raised 6 cubs to independence. The family was last seen in September 2011. 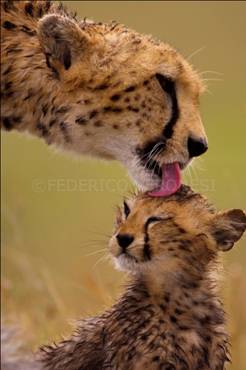 Female Shakira with her cub Rani in 2008 (Photo by F.Veronesi) 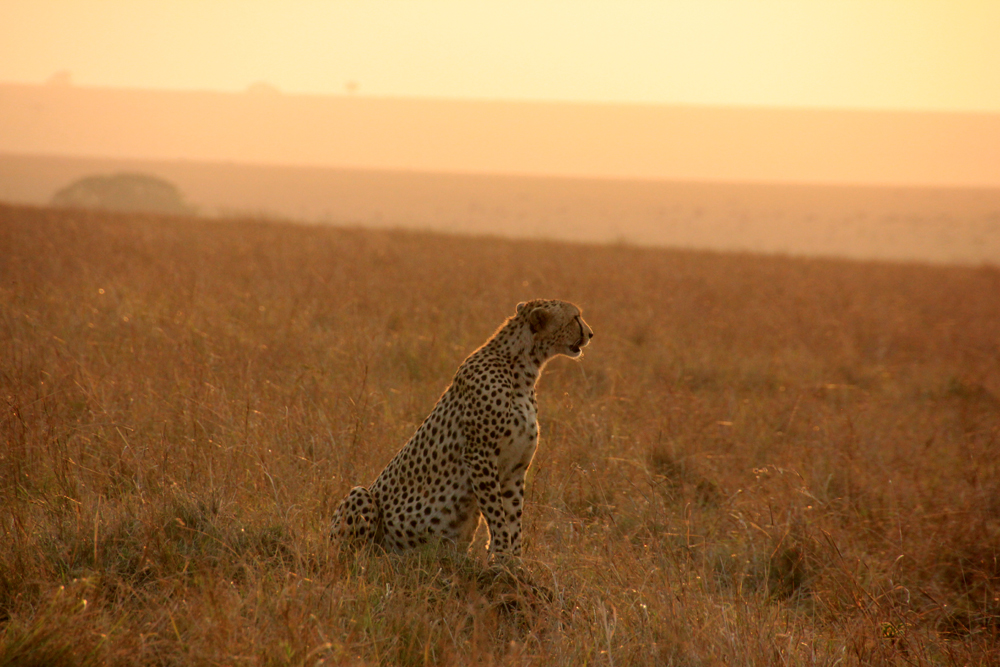 This female was born at the end of 2008 from the female Shakira. In the middle of May 2011, Rani was seen with two cubs. Based on the size of cubs, it’s likely that they were born in early April. At the end of May, she was seen again but with only one cub.

On 4th of December, 2014 we received information from the tour guides, that leopard was eating a cheetah on a tree. Our team arrived at the scene and found that the cheetah had been killed was 10 year old Sidai, one of the oldest cheetahs in the Mara. The leopard was feeding on a cheetah carcass for 4 days, leaving a tree for resting in a nearest bush in the afteroon or late evening. Cases of Leopards killing and eating cheetahs are well documented. One of the examples was Ol Jogi Game Reserve in Laikipia, where in 1995-1996 leopards were continuously killing cheetahs of different ages and feeding on their carcasses. The reserve was fenced hence limited carrying capacity of the area could lead to escalation of the territory/food competition among predators. Getting older, cheetahs like other animals, become weaker and therefore easier to prey on. Unlike lions, leopards do not waste a kill, but feed on it. Such cases seems to be rare in the Mara, although some guides witnessed these events. 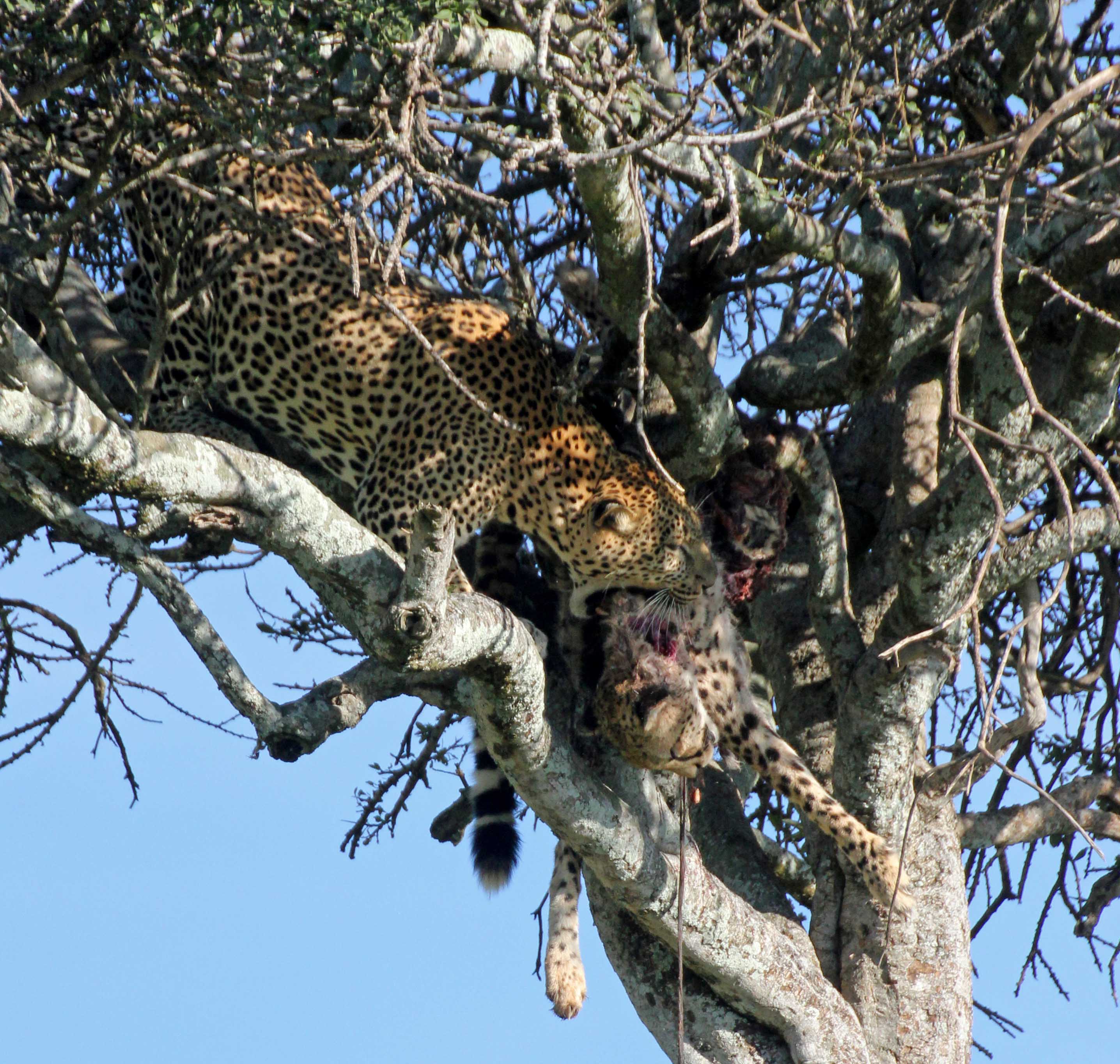 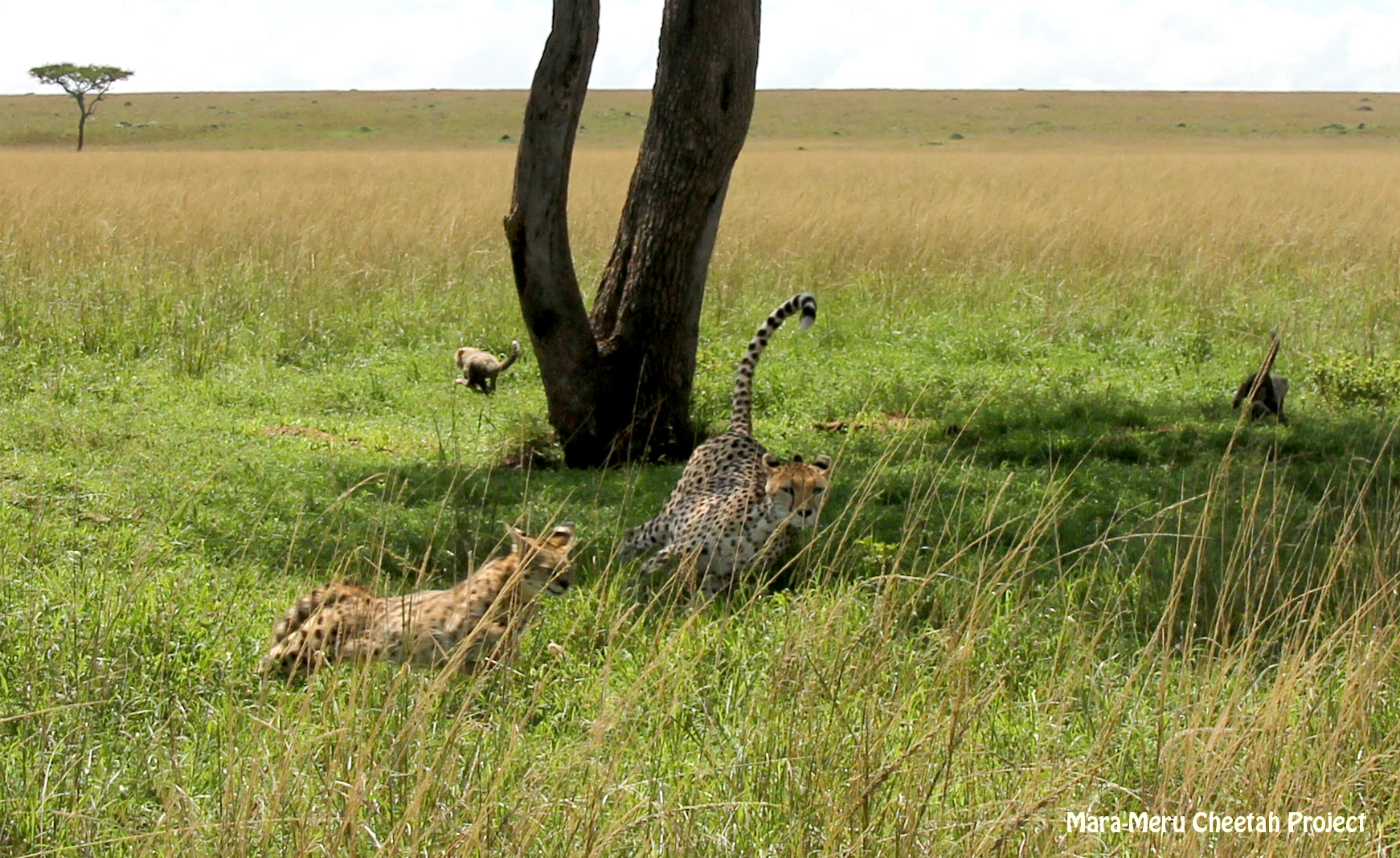 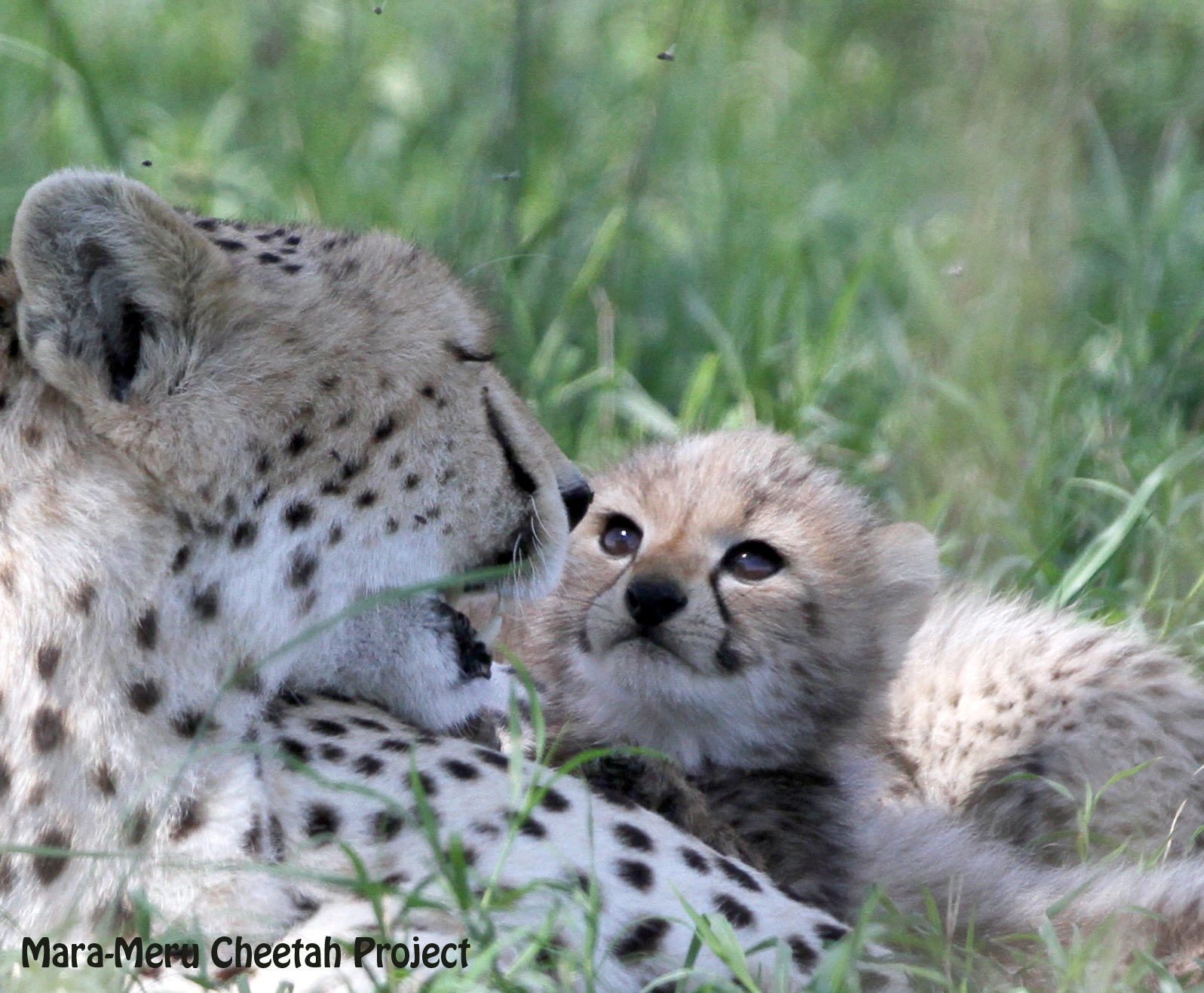 On 12 April, 2015 we observed unique encounter – Nashipa’s cubs have been attacked by a Serval cat.  Nashipai was lying aside in the shade of a tree, while cubs were playing around the tree trunk. The serval appeard from the West and started stalking playing cubs. Nasipai was keeping an eye on the cat, and was not considering it as a danger. Once the serval jumped towards the cubs, cubs ran in different directions, and Nashipai ran towards the intruder. Serval ran away, jumping high in a tall grass, and cubs joined around their mother.