By taking cubs around vast areas, females provide them with opportunity to learn different types of habitat, to experience encounters with prey, food competitors, humans and predators, so that in the future they will decide where o establish their territories. All females who have been taken by their mothers to the Maasai Mara National Reserve later on also bring their own cubs here. Selenkei – daughter of Imani, granddaughter of Amani and great granddaughter of Saba, have been raised in the conservancies adjacent to the Reserve, but her mother Imani visited different parts of the Reserve with her offspring. Recently, Selenkei showed up in the reserve with her two 4.5 months old cubs. By watching their mother, cubs learn survival strategies. Within a few last days, the family had unpleasant encounters with various inhabitants of the Mara plains, including jackals, vultures and hyenas. Yesterday, while feeding on a Thompson gazelle, Selenkei spotted a troop of baboons in a few hundred meters. She stopped eating and watched primates until they left from the sight, while cubs were still eating. If she had lost a kill to the baboons, then she would hunt again, if she was not full. When the family almost finished the meal, a hyena appeared on the scene. The vultures immediately began to approach the carcass, and Selenkei grabbed the carcass and continued to eat and watch the hyena. By that, female is not only trying to consume more food, but also drawing attention away of the predator to the carcass and drawing away from her offspring. 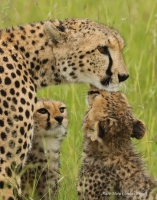 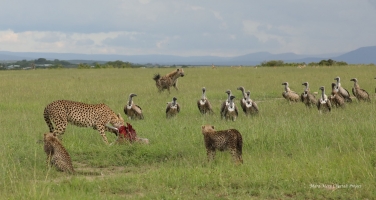 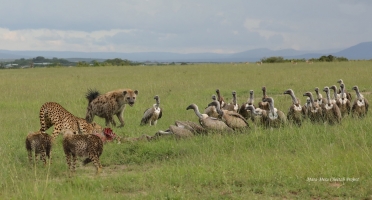 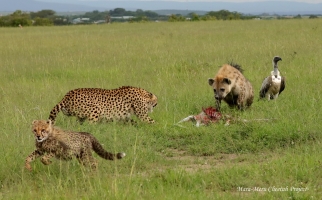 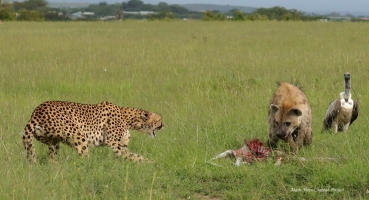 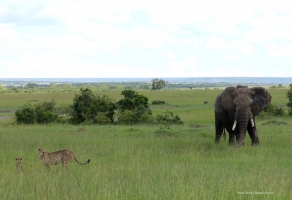 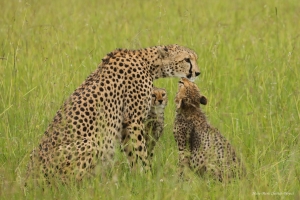 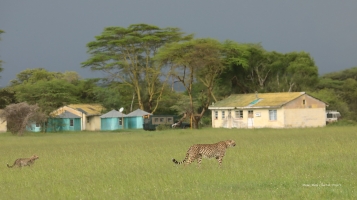 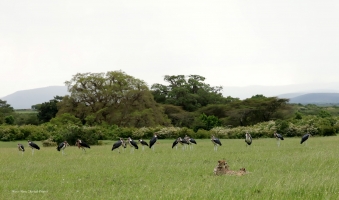