The cheetah is a highly adaptive and social species: as long-term observations in nature have shown, males are able to form not only permanent, but also temporary alliances with unrelated males. Such unions last as long as it is beneficial for each member. The Tano Bora coalition existed for 4.5 years, while we know that its former leader, Olpadan, was not related to any of the males of this group. After he lost one of his testicles in a fight with males in March 2019, his rank dropped. From the decision maker and leader of the group, he became the last in the chain and the last one to join the meal. In 2020, he tried to join the Mwanga and Mkali coalition, but the males did not accept him. In June of this year, Olpadan left the coalition in Naboisho, where the Tano Bora coalition had formed, and began a lonely life. The four members of his coalition waited for a partner for over 3 weeks, and eventually began to travel around their territory again. All of us were worried – what happened to Olpadan and where is he. The good news is he is alive and well. Moreover, he found another partner – one and a half year old Kijana, the son of Kuahidi. Kijana was the only cub in the litter to survive to independence. Mother left him in February, and he began traveling alone through the conservancies. In June, he was seen in Naboisho, then in Olerai conservancy, and now he came to the Reserve. Yesterday we observed him together with Olpadan, wherein the relationship between the males was very friendly, both behaved like long-term partners from the same coalition. They ate a large male impala together, and rested together after a meal and social grooming. From Serengeti cheetah study it is known, that for the formation of unions of males, two conditions must be met: the males were previously members of coalitions and have lost partners, and their age should not exceed 20 months – adult males see each other as competitors. However, as observations show, nature is rich in variations, as long as they contribute to the survival of the species. Olpadan is over 6 years old and is able to form mutually beneficial alliances with unrelated males. For young Kijana, an alliance with an experienced partner can also be beneficial. 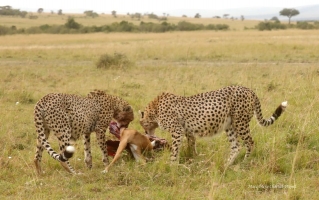 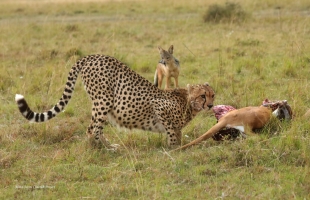 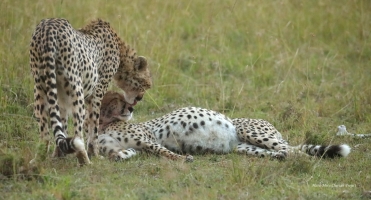